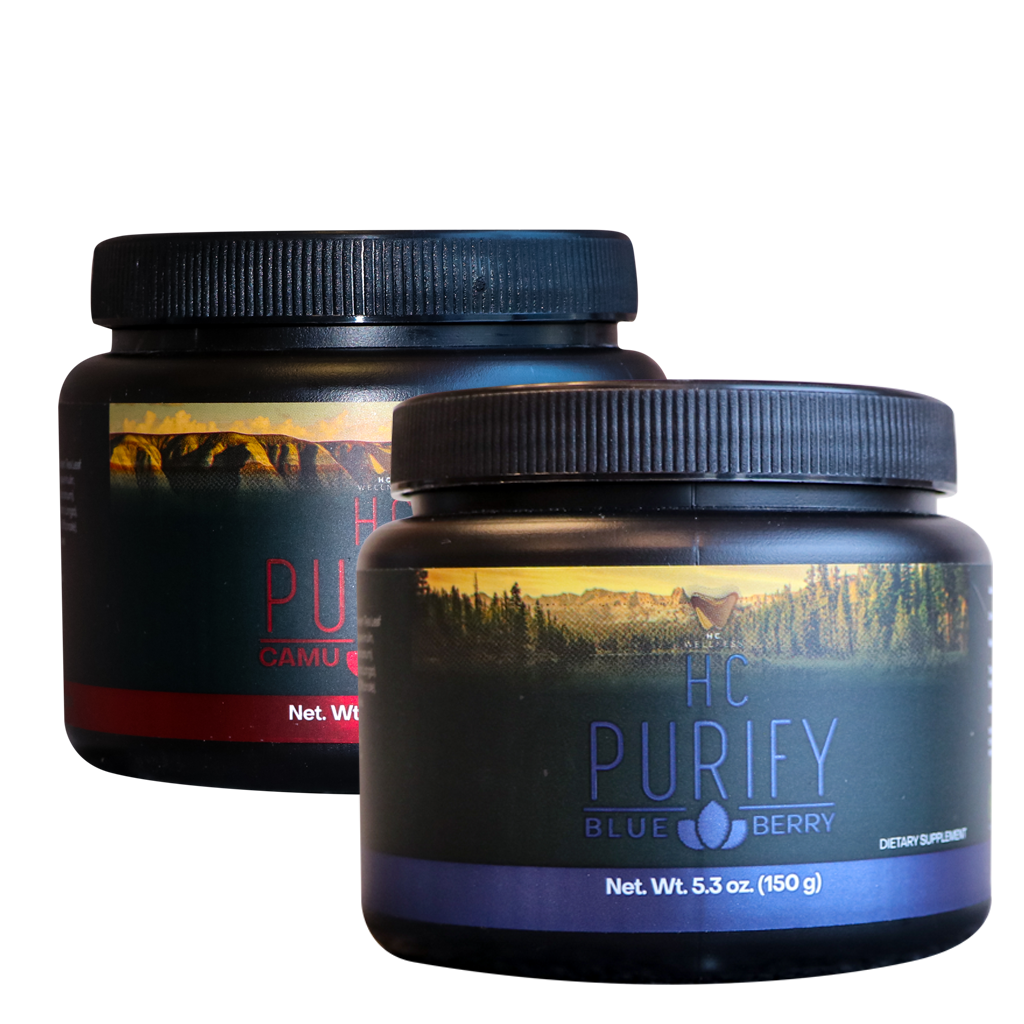 HC Purify is a supplement made from a blend of natural ingredients —green tea leaf, turmeric, milk thistle, inulin and ginger— that helps ensure the proper functioning of the body. It also regulates your digestive system and reduces your cholesterol and triglyceride blood levels.*

HC Purify is a hot/cold tea and comes in 2 flavors: Camu-Camu and Blueberry.

The concentrates used to make our HC Purify Detox Tea are expertly formulated to give your body what it needs in order to regulate your bowel flow and nutrient absorption. *

HC Purify fortifies and regulates your digestive system by stimulating its optimal function to avoid common discomforts, such as constipation, diarrhea and abdominal pain, which are ailments related to irritable bowel syndrome.*

Green tea leaf native to Asia, mainly in China and India. It is a medicinal plant that has been used for thousands of years due to its multiple antioxidant properties and high content in vitamins A, C and E, as well as trace elements. Its properties support the delay in blood vessels degeneration, which protect the body against heart diseases. Due to its thermogenic function, fat burning is achieved, as well as an increase in daily energy expenditure. It may reduce risk of diseases, such as cancer.*

Is an Asian flowering plant native to South-East India. Turmeric contains mainly a polyphenol termed curcumin, as well as polysaccharides, vitamins (A, B, C and K-complex) and minerals. It is widely used in many dishes around the world; besides, it is known for its antioxidant properties, which avoid overproduction of free radicals and cell damage, what may prevent the risk of neoplastic diseases. It supports an optimal bowel transit, avoids intestinal malabsorption disorders and optimizes liver function.*

A plant native to Mediterranean countries, used for a long time as an active element for many natural remedies to treat hepatic diseases. Its main component is silybin, which is a flavonoid, currently known for its antioxidant effect. Its properties reduce cell damage and tissue ageing, but mainly hepatic, cardiac and neurological damage.

It provides an anti-inflammatory effect and an immunomodulatory activity that may improve the response of the body to treat viral infections.*

Is a fructan able to create short-chain fatty acids. It is found in roots, tubers and rhizomes such as burdock, dandelion, yacon, chicory, among others. It is classified as a prebiotic that stimulates the development of gut microbiota and regulates digestive processes due to its high fiber content.*

Is a rhizome native to Asia, mainly India that is widely used due to its aroma and taste. It is rich in vitamins, mainly C and B, and minerals, such as potassium, calcium and phosphorus. Gingerol, its major component, is an essential oil and responsible for its spicy taste, which is used in medicine due to its anti-inflammatory properties. Its effectiveness to reverse the digestive symptoms has been shown. Some of the ailments it can treat are dyspepsia, nausea, spasm and gut inflammation. In addition, ginger improves the bowel flow due to its fiber content.*

DETOX AND CLEANSE YOUR BODY!

Ginger in the prevention of nausea and vomiting: a review.

Nausea and vomiting are physiological processes experienced by every human being at some stage of their life. They are complex protective mechanisms and the symptoms are influenced by the emetogenic response and stimuli. However, when these symptoms recur frequently,...

END_OF_DOCUMENT_TOKEN_TO_BE_REPLACED

In recent years, metabolic syndromes (MetSs), including diabetes mellitus, dyslipidemia, and cardiovascular diseases, have become a common health problem in both developed and developing countries. Accumulating data have suggested that traditional herbs might be able...

END_OF_DOCUMENT_TOKEN_TO_BE_REPLACED

Functional and therapeutic potential of inulin: A comprehensive review.

Inulin as a heterogeneous blend of fructose polymers is diversely found in nature primarily as storage carbohydrates in plants. Besides, inulin is believed to induce certain techno-functional and associated properties in food systems. Inulin owing to its foam forming...

END_OF_DOCUMENT_TOKEN_TO_BE_REPLACED

Milk thistle and its derivative compounds: a review of opportunities for treatment of liver disease.

Milk thistle extracts have been used as a "liver tonic" for centuries. In recent years, silibinin, the active ingredient in milk thistle extracts, has been studied both in vitro and in vivo to evaluate the beneficial effects in hepatic disease. Silibinin increases...

END_OF_DOCUMENT_TOKEN_TO_BE_REPLACED

Effects of Turmeric (Curcuma longa) on Skin Health: A Systematic Review of the Clinical Evidence.

Turmeric (Curcuma longa), a commonly used spice throughout the world, has been shown to exhibit antiinflammatory, antimicrobial, antioxidant, and anti-neoplastic properties. Growing evidence shows that an active component of turmeric, curcumin, may be used medically...