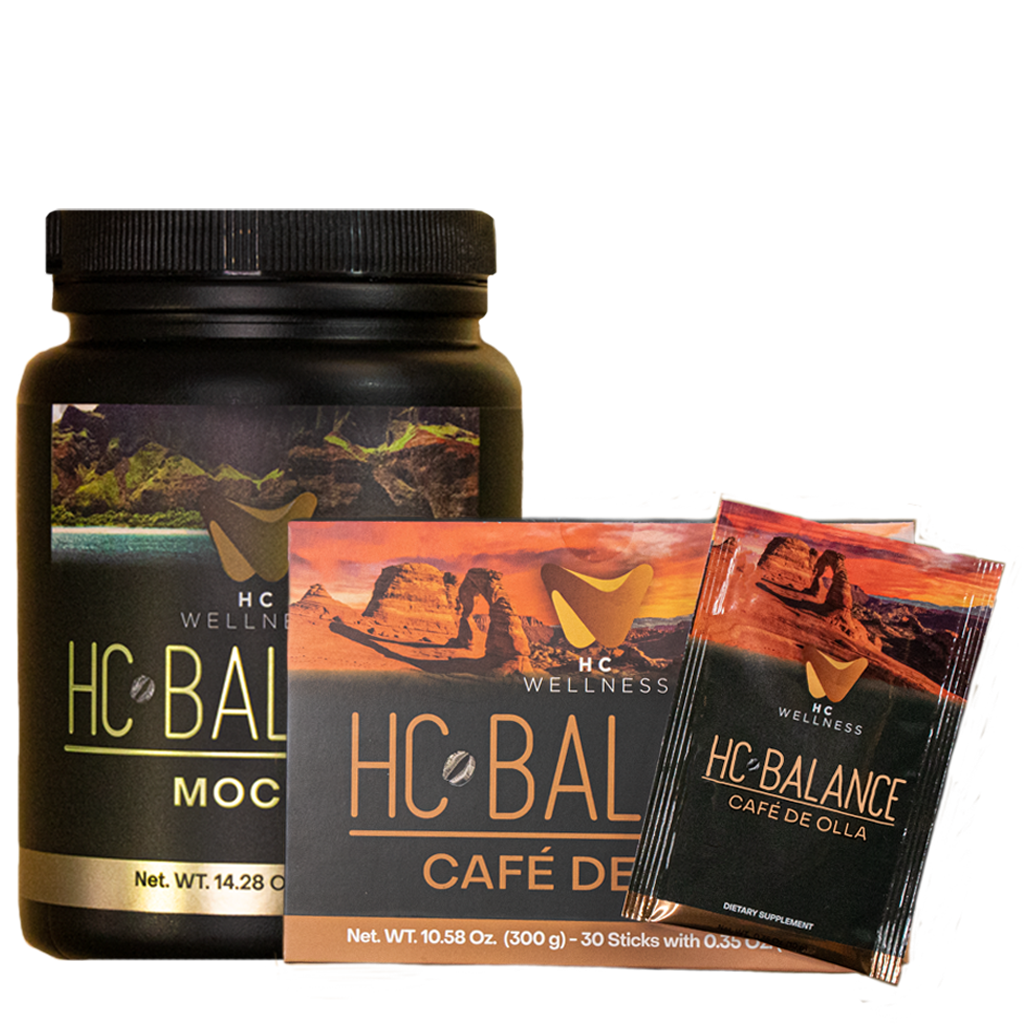 Is a supplement made from a blend of natural ingredients —Green Tea Leaf, Schisandra, Gymnema and Chromium— that helps balance your body due to its high content in antioxidants, adaptogens, vitamins, minerals and essential fatty acids.*

HC Balance provides you energy during the day and supports your metabolism, which helps regulate glucose, cholesterol and triglyceride blood levels.*

The concentrates used to make our HC Balance blended coffee beverage are expertly formulated to support and heal your body.*

HC Balance can be served hot or cold and comes in 2 flavors: Café de Olla and Mocha.*

BENEFITS TO IMPROVE YOUR QUALITY OF LIFE

Mexican coffee beans native to Veracruz made with Arabic roasted grains. Caffeine is its main ingredient and contains xanthine, which supports the central nervous system functioning and stimulates memory by improving brain blood flow. Since it is an antioxidant, it may help prevent the development of neurological diseases (such as Alzheimer). It also boosts physical performance during physical exercise and reduces the risk of degenerative diseases.*

It is a perennial woody vine native to Asia, Arabian Peninsula and Africa. Its main ingredient, gymnemic acid, supports the insulin production and regulates blood glucose levels. Gymnemic acids are its main ingredient and support the insulin production by regulating blood sugar levels. It belongs to the saponins group and provide benefits to regulate high cholesterol and triglyceride levels. Gymnema is involved in appetite control, what helps get an ideal body weight. Its hepatoprotective function prevents the development of diseases related to toxin overload in the body.*

Green tea leaf native to Asia, mainly in China and India. It has a long history of use in herbal medicine and a broad range of therapeutic properties. It is rich in vitamins A, C and E, B-complex, antioxidants and trace-elements. Its properties produce a delay in blood vessels degeneration, which protect the body against heart diseases. Due to its thermogenic function, body fat burning and an increase in daily energy expenditure can be achieved. In addition, it may reduce the risk of serious health conditions such as cancer.*

It is a woody vine fruit native to Northern China and Far East Russia. Schisandra has several physiologically active elements, such as essential oils, phytosterols and vitamins A, C and E. It is an optimal adaptogen used to increase physical and mental performance and to reduce effects caused by stress in the organism. It also has stimulating properties from antioxidant enzymes, which help relieve insomnia and fortify the immune systems response to infections.*

Chromium A Trace mineral essential to control glucose and lipid metabolism. Its principal function is to increase insulin function in the body. It also plays an important role in degradation of lipids in cells, which helps regulate cholesterol levels.*

NURTURE, REPAIR AND REGENERATE YOUR BODY TO GET THE BEST OF YOU WITH HC BALANCE

Chromium as an essential nutrient for humans

Chromium is an essential nutrient required for sugar and fat metabolism. Normal dietary intake of Cr for humans is suboptimal. The estimated safe and adequate daily dietary intake for Cr is 50 to 200 microg. However, most diets contain less than 60% of the minimum...

END_OF_DOCUMENT_TOKEN_TO_BE_REPLACED

Schisandra chinensis and its phytotherapeutical applications.

Schisandra (Schisandra chinensis) has been used for centuries as a plant of traditional Chinese medicine. Its biological activity and pharmacological use are associated with dibenzocyclooctadiene lignans, while specific polysaccharides may also be involved. The...

END_OF_DOCUMENT_TOKEN_TO_BE_REPLACED

BACKGROUND: Green tea (Camellia sinensis) is a beverage consumed for thousands of years. Numerous claims about the benefits of its consumption were stated and investigated. As green tea is experiencing a surge in popularity in Western culture and as millions of people...

END_OF_DOCUMENT_TOKEN_TO_BE_REPLACED

Gymnema sylvestre is a plant included in Apocynaceae family and is located in many regions of Asia, Africa and Australia. This plant is widely used as a traditional therapy for different purposes. Even now it is being used as a dietary supplement due to its numerous...

END_OF_DOCUMENT_TOKEN_TO_BE_REPLACED

Background. Gymnemic acids, from the plant Gymnema sylvestre (GS), selectively suppress taste responses to sweet compounds without affecting the perception of other taste elements. The aim of this study was to investigate the effect of consuming a GS-containing mint...

END_OF_DOCUMENT_TOKEN_TO_BE_REPLACED

A systematic review of Gymnema sylvestre in obesity and diabetes management.

The prevalence of obesity is associated with many health-related problems. Currently, more than 300 million people are considered to be obese. According to the World Health Organization (WHO), by 2030, 87 and 439 million people will be affected in India and the world,...